This guide is written for newer restoration shamans who are interested in healing dungeons. This guide does not claim to present the “best” or “only” way to heal dungeons as an rsham: instead, it presents a method of dungeon healing that has worked for many folks so far.

First of all, take this talent build: 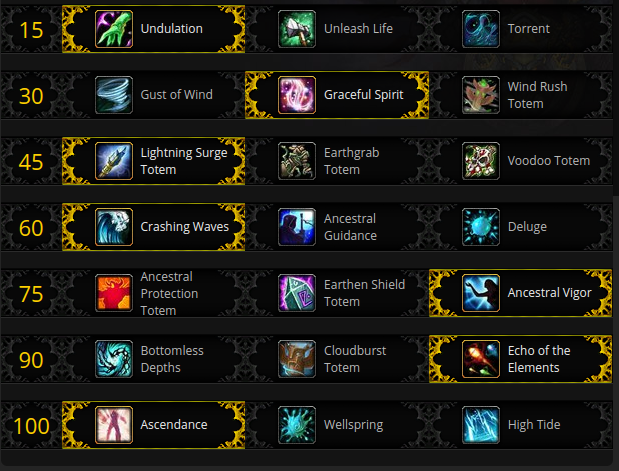 Feel free to swap Graceful Spirit for Gust of Wind. Other adjustments can be made based on your preferences, but this build is an excellent starting point for dungeon healing.

When healing dungeons, take opportunities between pulls to drink for mana. In other words: except for Tyrannical boss fights that last a while, mana should not be a concern in dungeons. If needed, use mana potions: ancient mana potions are cheap.

As a general “healing rotation” for dealing with incoming damage, use

Because of Crashing Waves, each riptide grants two stacks of Tidal Waves. That makes your next healing surge have a very high chance to crit, which in turn will give Queen Ascendant very high uptime. In other words, you’ll be bonking party members with healing surge crits (which are on the order of about 900k), with every 3rd healing surge being buffed by the Undulation talent (which will be on the order of 1.4mil), and because of QA, you will enjoy very high haste in this rotation.

Those 900k/1.4mil numbers are not taking our mastery into account. On a low health target, an undulation’d surge can easily heal for over 1 million health. You can frequently take nearly-dead DPS straight to full health this way.

These healing surges will eat your mana, but as mentioned above, drink between pulls.

In cases where party members all need moderate healing, use Chain Heal or (better, if available) the Gift of the Queen artifact ability. Surge is not your only tool; it’s merely the best for the strong single-target healing required in dungeons. With the new 7.2 traits, Gift of the Queen is appropriate even for moderate to severe group healing.

Frequently drop Healing Stream Totem where applicable. It does an appreciable amount of “passive” healing and is great for taking care of the people who need light healing. That lets you spend more time on DPS.

With this build, you have three healing cooldowns at your disposal:

Use Ascendance for periods of high group-wide damage. It has a 15 second duration and 3 minute cooldown, so you can use it several times in a dungeon. With Ascendance going, your Healing Surges will be duplicated and split to all the party members within 20 yards. This will effectively make your group immortal, so long as the damage is actually healable.

Use HTT for periods of moderate, sustained damage - for example, for the Lantern of Darkness in Maw of Souls. HTT will help you keep up with incoming damage, but it won’t single-handedly save the group.

SLT is probably the most interesting ability in our toolkit. It creates one giant “health pool” out of everyone who stands in it.

SLT is the preferred cooldown for cases where there are extreme differences in group members’ health. For example, it can be used to save a tank who is nearly dead (so long as you and the DPS have sufficient health to redistribute). It can also be used to save pulls where the tank has not established aggro appropriately on the mobs, and as a result they are walking around hitting random people - for example, the jump off point in Vault where you may aggro several spirits and spiders. In those cases, total damage taken by the group is still higher than usual (because a mage has far less mitigation than a warrior tank, for example), but as long as everyone’s inside the link, you can usually heal through it.

Help with DPS. Use Flame Shock and Lava Burst when minor heals are required (especially if Healing Stream Totem is out). Our mastery makes our heals more effective on lower health targets, so don’t feel rushed to heal someone who is at 95% health (unless there is impending doom). In heroic/mythic/low level M+, as a healer, you can do very respectable damage on trash pulls.

Use Lightning Surge Totem to help with stuns on trash pulls. Coordinated group stuns are extremely potent in dungeons, and surge totem (also sometimes called “cap totem” or “capacitor totem,” its previous name) is no exception. You should try to use cap totem almost on cooldown, usually every other trash pack. Try not to overlap it with another AOE stun.

Cap totem basically stops the damage the group is taking for 5 seconds, in almost all cases. If you know a pull’s going to be bad, use it when you feel you can’t keep up with the incoming damage anymore.

Use Wind Shear to help with interrupts. Proper interrupts are also extremely potent in dungeons, and at higher M+ levels they are effectively required in some dungeons (e.g., Arcway). Wind Shear is the best interrupt in the game: 30 yard range, 12 second cooldown.

I usually let the tank take the 1st interrupt (most do) and then I take the 2nd. If there’s a competent melee DPS in your group, they may take the 2nd interrupt instead; at that point you probably aren’t in an interrupt rotation. Be prepared to interrupt anyway. People are flaky, so expect them to miss interrupts, and don’t be flaky yourself.